if you follow my blog for a while, you know that I am a huge fan of the american drugstore brand Sally Hansen.
In the USA they sell a big variety of nail care products and of course nail polishes.
They have different types of collections. Some are the Salon Manicure, Diamond Strength, Xtream Wear, Insta Dries and of course  special editions like Fuzzy Coats, the Gem Crush Collection, Sugar Coats and they also sell Nail polish Strips.
In Germany we sadly don’t get the full range of products which I am very sad about.
Mostly we only get some of the nail care and the Salon Manicure. The bad thing, they cost a loooooot more then in the USA.

While we were in New York I bought some of their USA polishes, to try them out since I heard so much good things about their products.

I bought the following:

Thanks to Casey, I also own the rest of the Fuzzy Coats now, but I already showed them to you here.

Back in Germany I was so angry at myself for not buying more of the puppies.
The quality is really great and the price in the USA is so good! The Xtream Wear polishes are around 4$ if I remember correctly and the Fuzzy Coats and even Diamond Strength polishes are only about 6$. Here in Germany the Fuzzy Coats were available last year and cost 9 euro, which is around 12,50$. What?

Anyway, that is why I don’t really want to buy them her in Germany, plus I love the Diamond Strength and Xtream Wear more then the Salon Manicure….so that is that….
Recently Rossmann offered 30% on all their nail polish products, which was the perfect chance for me to get some Sally Hansen products here in Germany as well.

I bought two nail care products, Doubble Duty and Complete Care.
I tried them and really like them because they both can be used as base coat and top coat or the Complete Care simply as nail care on its own. 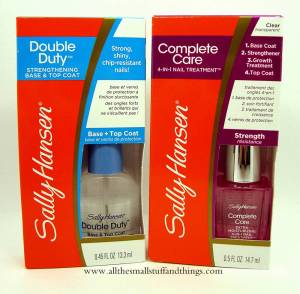 Here are my favorites. 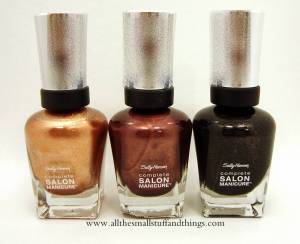 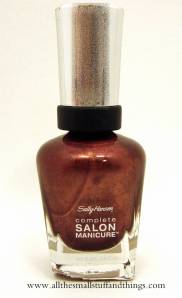 Here are two nail designs I did after getting these. 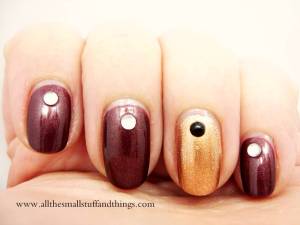 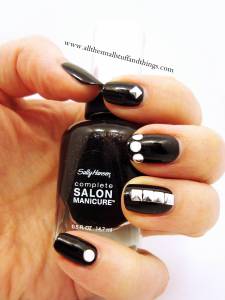 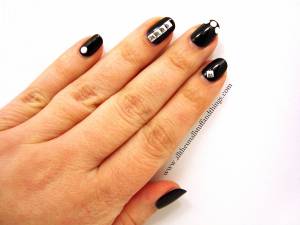 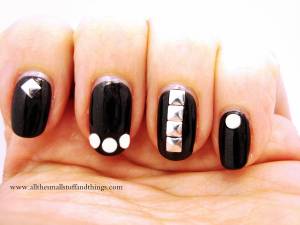 What do you think of Sally Hansen products? I heard that the Insta dry fast drying top coat is super great, maybe I will try this one next :D
I also would love to try the Nail Polish Strips! awwww~~ my poor wallet.

Let me know what you think and which are your favorites if you use a lot of SH products.

For those of you who are too young to know this show, stop everything you are doing right now and go on Netflix or whatever platform you have in your country to watch TV shows.

Buffy was the most awesome show and my personal favorite when I was 13 until the show ended.
While Buffy was on TV nobody and I really mean NOBODY, not even my best friend, was allowed to disturb me.
If anyone called while I was watching my show, my mom had to tell them I will not come to the phone because of Buffy haha
Now you can imagine how much my friends liked that…..they didn’t.
I actually pissed them off pretty badly at times.

Anyway, I loved this show so much that I got blonde highlights in my natural blonde hair, bought the same earrings and clothes as Buffy and even carved my own stake.

Did I care what people thought of me? No haha

Well one thing I saw in the show was the nice “bloody” manicure that the Vampire Drusilla had in different versions.

Usually it was a red base with white french tips, sometimes she also had a black base and white tips.

Here you can see Drusilla with her Vampire companion Spike.
Together they were quite a couple, I loved them because they were so crazy and also crazy in love with each other. 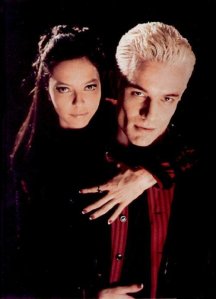 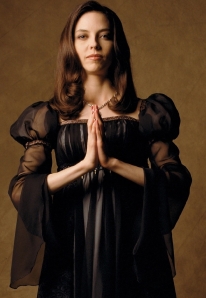 Here you can see her with the black base and white tips.

I thought it would be a fun to mix it up and leave the base natural and just paint the tips red.
I imagined her crabbing her victim so hard that her nails actually hurt the skin and turned red.
she was a very violent and strong Vampire so I thought this could have actually fit her.

For those of you who still want to see a manicure close to the original, here is the black mani with white tips.
I did not edit these pictures too much, because of the white tips. Else they would have disappeared haha

For this manicure I used Essence black (144 black is back) and white (152 give me nude, baby), as well as Essies blanc on top of the Essence white.

Who knows the meaning of this ring?

The Claddagh’s distinctive design features two hands clasping a heart, and usually surmounted by a crown. The elements of this symbol are often said to correspond to the qualities of love (the heart), friendship (the hands), and loyalty (the crown). A “Fenian” Claddagh ring, without a crown, was later designed in Dublin. Claddagh rings, with or without the crown (most commonly with a crown), have come to denote pride in Irish heritage, while continuing to be symbols of love or marriage.

Claddagh rings may be used as friendship or relationship rings depending on the intention of wearer and, in the case of a gift, of the giver. There are three traditionally accepted ways of wearing the ring which may signal someone’s relationship status:

I got my Claddagh ring while I was in Dublin with my BF. 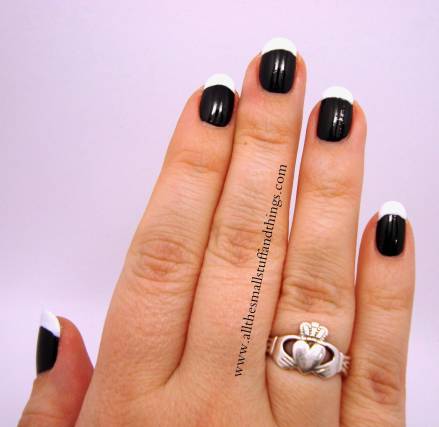 And last but not least here is my favorite manicure. As you can see it contains a cross, the Buffy “B”, a coffin, and Buffy’s stake as well as a dead vampire on my thumb :D

Now tell me, did you watch Buffy and/or Angel?

What was/is your favorite TV show?

today I want to show you two more of my favorite polishes.
First I bought this Rival de Loop Long lasting nail polish and fell in love with it. I don’t even know what this color is called or how it would be best described as but you can see what it is.
Sadly when I contacted the company, they told me that they neither produce nor sell this color anymore so I was very frustrated. This polish is one of my go to polishes when I have no idea what to put on.

So I was looking for a dupe, which is not easy to be found.
While I was in New York this January, I saw this beautiful Sally Hansen Diamond Strength no chip nail color ( 460 Save the Date). I thought it looked pretty similar to the Rival de Loop one and since I heard so many good things about Sally Hansen polishes this was my first ever Sally Hansen nail polish. It contains 13,3ml and was about 6 $ I think. I put it on immediately that night and was very impressed. It went on very smoothly because of it’s liquid consistency. The only thing I am still getting used to is this super thin and loooong nail brush^^
I don’t get it, because the Fuzzy Coat I bought later on has a much nicer brush.
On the other hand, my two Xtream Wear polishes from Sally Hansen have the same thin brush.
I don’t know, I think they should switch all the thin brushes to the ones from the Fuzzy Coat, because it makes it much easier to apply the polish. 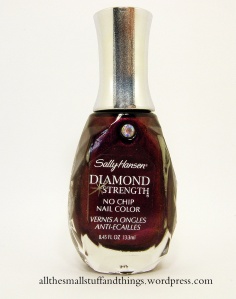 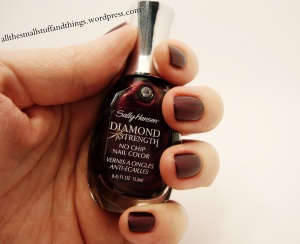 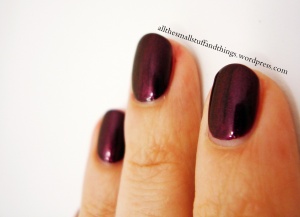 The polishes are very similar looking in the bottles.

When you apply them you can see the slight difference though.
The second finger on the left was painted with the Sally Hansen polish, the second from the right is the Rival de Loop polish.
As you can see, the Sally Hansen polish is a bit more purple with a golden shimmer. The Rival de Loop polish is more dark red with golden shimmer.