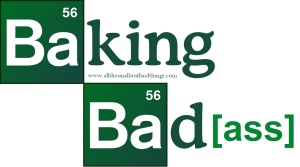 welcome to another episode of Baking Bad[ass], the little segment on my Blog where I show you some of the things I baked.

Today I would like to show you another cake I am very proud of. I made this cake as a surprise for someone I know. Last year he posted the following picture of a Marvel/DC cake on instagram, saying he wouldn’t mind if someone made that for his next Birthday. 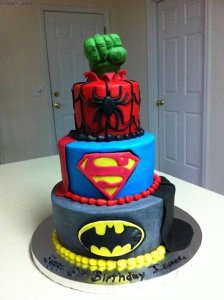 I got some help from friends to arrange the surprise Birthday party and started making the cake about three days in advance.

Before I started I made a few sketches of how I wanted the cake to look. At first I wanted a lot more characters, like Thor (represented by his hammer) and actually a real Captain America shield. In the end I decided to take it down a notch and only incorporate the shield on the bottom layer of the cake.

Here are the graphics I used to cut out all the important signs. Feel free to use them if you plan on re-creating the cake. 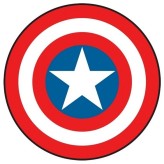 As you will see on the following pictures I switched the Spiderman eyes to a big spider on the top-tier and  switched it up on the bottom tier as well.

The whole cake was made of 4 separate tiers and a fondant hulk fist.

The second (Batman) tier was 26 cm ⌀ and baked twice. The inside was a nice dark chocolate cake with choco pieces.

The third (Superman) tier was 18 cm ⌀ and also baked twice. For the inside I baked one cake with a bit of choco inside and the 2nd one white, both with choco chips as well.

The fourth (Spiderman) tier was made of three 12 cm ⌀ cakes.

On the day of the party I put the tiers on top of each other and started with the decorations. 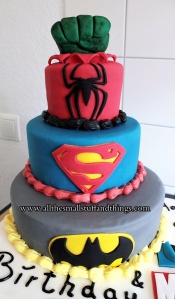 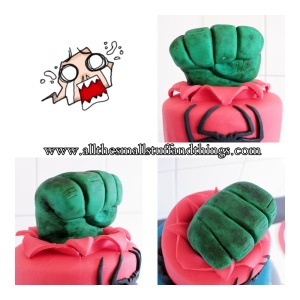 The cake was a lot of work, but hell it was fun! In the end the cake was the size of a solid wedding cake, so the about 20 people were challenged to eat a lot haha

The Birthday boy didn’t expect anything at all and was very happy, which made me so happy. You might know Robert from the SocialMovieNights. He is the one who always creates great events with his team and tries to give back to his community. For his Birthday I wanted to give back to him. I feel very blessed that he enjoyed the surprise that much.

I think the biggest joy in life is to give. So if you know you can make people happy, even with little things or saying something – do it.

Be nice to people.

[you can find my baked creations on www.youtube.com/bakingbadass ]